Save Our Libraries! Again 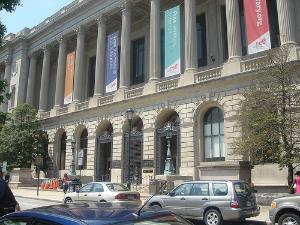 Think Philly is in trouble now? Watch how much worse it gets if the libraries close down.

Well, it looks like the libraries, once again, are on the chopping block. And this time, it’s ALL OF THEM.

Honestly, do we have to go through this exercise again? Let me be blunt and brief: libraries are more than just places to borrow a book or a DVD. They are a crucial part of the fabric of our community. They provide Internet access for low-income individuals and families, including access to help-wanted ads and online job applications. They provide free space for after-school programs for kids and community classes for adults struggling to earn their GED or learn English.

And they provide books. Remember them?

People who use Philadelphia’s libraries are suffering right now: I know of several English as a Second Language (ESL) classes held at branches of the Free Library that have already been canceled due to shorter hours, disrupting the lives of immigrants trying to achieve citizenship — and putting adult education teachers, already poorly paid, out of work.

Here’s another reason the libraries are so important: Philadelphia is home to an astonishing number of poorly-educated adults: about 400,000 of our neighbors don’t hold a high school diploma and 22 percent of the 1.1 million adults who live here don’t even have basic literacy skills: that’s around 250,000 people who can’t make it through a comic book.

Before you go pointing your finger and crying “Tough luck for them,” think about the impact. If you can’t read or do basic math, you can’t get a good job. If you can’t get a good job, you don’t earn as much. You don’t earn as much, you can’t contribute as much revenue to the economy and tax base. Heck, maybe you can’t get a job at all, so you have to get welfare, which everyone pays for. Or maybe you start selling drugs (and I’m not talking about pot, which should be legal), which brings crime to your community and drives down your neighbors’ property values. And hey, maybe you get arrested and now everyone has to pay for your three-hots-and-a-cot.

What’s more, kids tend to emulate their parents. Low literacy and low educational achievement is handed down from one generation to the next, a vicious circle that has no benefit to anyone.

You wanna complain about taxes? Check this recent analysis from the Philadelphia Youth Network (PDF):

But hey, we can’t afford the libraries.

By the way, this says nothing about how the city’s embarrassing low literacy rates affect us on a macro basis either. Let’s say you’re the president of some big corporation and you want to relocate. Besides tax rates and other expenses, one thing you’re looking for is a skilled workforce. So where do you want to set up shop? (PDF) Boston, where in 2006 about 40 percent of residents had a bachelors degree; Stamford,Conn., where more than 42 percent of residents graduated from college; or Philly, where only 31 percent did?

Or what about the city’s immigrants, whose numbers skyrocketed over the past couple of decades? According to the 2005 American Community Survey, 24 percent of Philadelphia’s immigrant population — about 83,000 individuals — live below the poverty line. Fully 150,000 working-age immigrant adults have limited proficiency in English, including 55,000 Spanish speakers and an astonishing 51,000 of immigrants from Asia. The National Institute for Literacy reports that of those families that speak Spanish in the home, more than 32 percent either have poor English skills or don’t speak the language at all. Now apply all that stuff above about the costs of unemployment and tax receipts to a population that relies on places like libraries for language instruction.

Here, I’ll make it easy: according to a study done by the U.S. Department of Education, those in the lowest literacy levels were less likely to be employed, worked fewer hours in a week, and earned lower wages than those with higher literacy proficiency. In Philadelphia, this problem is compounded by the loss of manufacturing jobs, and the increase in service, medical, and technical jobs, all of which have made fluency in the English language more important than ever in obtaining and maintaining employment.

The geniuses in the Pennsylvania Legislature and in our own damn city administration may say “Well, we can’t afford those libraries anymore,” when the fact is we can’t afford NOT to have them.

It’s a flaming disgrace, and there is no shortage of bad actors to blame, from City Council for underfunding the pension plan, to the mayor who, according to community activist and former candidate for council Marc Stier, “only very haltingly and at the end of the process, tried to engage the public in fighting along side him for the city
,” to (who else) the batshit crazy Republicans in the State Senate who have this unholy fetish with robbing unionized workers of their right to bargain collectively, and who delayed and delayed and delayed and delayed and delayed some more before choosing what has been aptly described as “budget terrorism and blackmail.”

The Daily News and Inquirer keep reporting that a deal is near, but I am less sanguine. So as usual, I encourage you to call your legislators in Harrisburg: you can find your senator here and your representative here. Tell them to save our libraries.

This entry was posted in Libraries Philadelphia trouble senator disaster. Bookmark the permalink.