Nicki Minaj is known for her slow wine. She’s mastered it. A perfect ménage — languid, sex-soaked, and hypnotic. But we’re talking delivery, not dancehall, folks. The Queens native spits a sweet sixteen. Her lyrics — fun and flirty, and a foot past suggestive — may rival her male counterparts’ but it’s that sex-kitten purr that allows her to grind in her own lane

After making some noise on Wayne’s I Am Music tour with the rest of his Young Money crew, the former MySpace/mixtape mistress is ready for her major label debut. And we’re amped like an electric guitar. Honey’s favorite Harajuku Barbie stepped away from the studio to play dress up (or dress down), snap a few flicks, and rap about her upcoming album. Just call us wine enthusiasts. 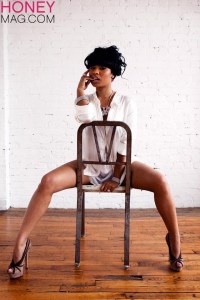