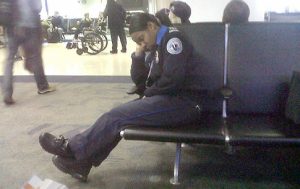 The Transportation Security Administration worker was put on desk duty after she was spotted sleeping in plain sight at LaGuardia Airport – the latest black eye for the federal agency.

Brooklyn traveler Bucky Turco said he had just arrived at his departure gate on Sunday when he saw the uniformed worker snoozing in a chair, head resting in her hand.

“I was shocked,” Turco, 35, said, of the 8:15 a.m. encounter. “I’ve never seen a Department of Homeland Security official sleeping inside an airport.”

Turco, 35, snapped a photo of the worker, who woke up about 10 minutes later during an announcement that the Frontier Airlines flight to Denver was boarding, he said.

After rising from her seat, the groggy employee immediately joined her colleagues who were performing secondary security checks at the gate, Turco said.

Turco was flummoxed by what he witnessed.

“In light of their recent follies, it just seemed that a federal agency beleaguered by bad news of late should probably worry about their image a little more,” said Turco, founder and editor-in-chief of the counter-culture magazine Animal.

“To be fair, she could have been on a break. But you don’t go to a precinct and see a police officer sleeping at their desk.”

Turco posted the picture on his Web site. Someone sent a link to TSA officials Tuesday and the worker was immediately interviewed, an agency spokeswoman said.

The guard was put on desk duty pending the outcome of an investigation.

“We recognize that our officers have very demanding jobs that require constant vigilance and hours on their feet,” TSA spokeswoman Ann Davis said.

“But nonetheless, it was completely inappropriate for her to rest in a public area while on her break as opposed to a nearby break room.”

The embarrassing incident is the latest in a series of high-profile TSA gaffes.

Earlier this month, a 22-year-old TSA guard at Newark Airport left his post, allowing a romantic grad student to breach security for a final kiss with his girlfriend.

Just two weeks later, on Jan. 17, a Haitian evacuee slipped through a door leading to a restricted area at Kennedy Airport, sparking a security scare.

Critics of the TSA say the latest incident is minor compared with the other flubs, but revealing nonetheless.

“These people are underpaid, overworked. They don’t stay in the job long, which tells you a lot about job satisfaction,” said Bruce Schneier, a security expert.

“It all makes sense that you would see this sort of thing, but there’s so many egregious things that the TSA is doing that this doesn’t even [bother me].”

This entry was posted in airport, caught, lga, sleeping, tsa. Bookmark the permalink.