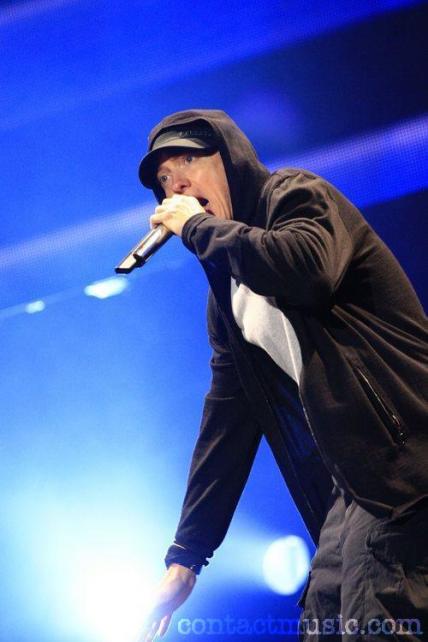 EMINEM paid tribute to his murdered best friend PROOF and appealed for the release of jailed pal LIL WAYNE during his first European show in five years on Saturday (10Jul10).

The Stan hitmaker took to the stage in Scotland for his headlining slot at the annual T In The Park festival and thrilled fans with a 29-song set.

During the show he performed with his group D12 and also sang No Love, his duet with Wayne, who is currently serving a year-long sentence in a New York prison after pleading guilty to gun possession charges in March (10).

Eminem shouted out “Free Lil Wayne” before he began the track, to rapturous applause from the crowd.

The star, real name Marshall Mathers III, also used the gig to remember his pal Proof, who was shot dead in his native Detroit, Michigan in 2006.

Standing in front of a projected image of the late rapper on a screen behind the stage, Eminem told the audience of some of his memories of the star.

He said, “I remember a time with D12 in Amsterdam, me and Proof, we were eating weed brownies. I started speaking in tongues.”

As he brought his set to a close, he thanked the crowd for turning up to show their support: “Everybody who’s an Eminem fan, I just wanna say thank you so much for the support you’ve shown over the years, for not giving up on me. I hope you enjoyed the show as much as we did tonight. Peace.” ContactMusic.com

This entry was posted in Uncategorized. Bookmark the permalink.